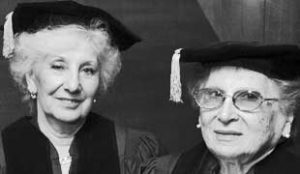 The honor was received by the President of the Association, Estela de Carlotto, and Vice President, Rosa Rosinblit, at a ceremony held in the famous Madison Square Garden in New York City on May 20, 2005.  With this honor, The New School recognized the Association of the Grandmothers for its contribution to human rights and its work in research to recover their grandchildren who were born in captivity and kidnapped during the military dictatorship, which took place in Argentina between 1976 and 1983.

This award, the University in Exile award, was established in 1998 by The New School and is given to outstanding figures who fight for freedom, human rights, and democracy.

The event, attended by several thousand people, was led by the then President of the university, Bob Kerry, and featured a keynote address by Chief Justice of the Supreme Court of the United States, Stephen G. Breyer, who was also given an honorary doctorate degree in this same ceremony.

At this event, the 69th Commencement, honorary degrees were also presented to artist Jenny Holzer, historian David Levering, writer August Wilson and sociologist Manuel Castells. At this 2005 Commencement, 2,463 students graduated from the various schools of The New School.