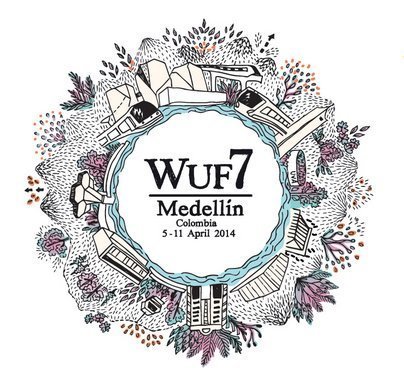 The Design and Development Program, integrated by the Observatory on Latin America (OLA), The New School University, New York; the School of Architecture, Design and Urban Planning (FADU), University of Buenos Aires (UBA) and the Faculty of Architecture, Chulalongkorn University, Bangkok, will present the progress on their research at the World Urban Forum 7, organized by UN-Habitat, at Medellín, Colombia, between April 5th and 11th, 2014.

1) SIDE EVENT, The New School

This event presents a range of student and faculty-led projects from The New School spanning a wide geographic and disciplinary spectrum in the urban domain. As a series of rapid presentations, this event is aimed at urban students, academics, practitioners and policymakers engaged with capacity building, engagement of youth in urban transformations, and a unique equilibrium between theory and practice. The program introduced in this side-event will continue with concurrent breakout sessions in the WUF exhibition to discuss individual projects in more detail. A self-titled publication will be distributed to audience members and other interested parties at the event.

The aim of this event is to present three parallel interdisciplinary case studies analyzing planning and policy initiatives geared towards socio-spatial inclusion in the river basins of Bangkok, Buenos Aires and New York. The case studies go beyond sectoral and disciplinary limits, to ask how to redefine urban territories while reducing exclusion in the transformation.

The interdisciplinary approach to these issues brings together design, social science and history, and it articulates knowledge around the dynamics of social life in physical space according to the particularities of the society and history. The three case studies focus on the plans and policies for transforming urban spaces, and jointly the interactions between design and social development in public policies. They highlight the tensions produced between the implementation of urban projects and their social consequences.

The objective of the WUF7 theme -Urban Equity in Development: Cities for Life- is to bring urban equity into the centre of development. Equitable urban development ensures that all urban citizens will have equitable access to public goods, basic services and opportunities. This goal can only be achieved if cities are able to mobilize adequate financial resources for urban development.

This dialogue provides a platform for participants to discuss challenges facing cities, particularly in developing countries, in mobilizing adequate revenue for financing urban development and the solutions to these challenges. Moreover, participants will share experiences from both developing and developed countries on innovative instruments that can be utilized by local authorities to generate additional revenue for urban development in developing countries.
+ More information

New forms of productive / inclusive economic activity appear in many cities as global economic crises become more frequent. A rich landscape of opportunity arises from technological innovation, increased information flows, entrepreneurialism, community organizations, and income-earning opportunities led by a range of new participants -youth, minorities, social entrepreneurs, etc. The rapid growth of the knowledge economy along with community and collaborative initiatives, and an increased ease of financial transactions, demonstrates that traditional understandings of infrastructure, participation, and productivity should be redefined.

This event is part of an ongoing collaboration between The New School in New York, the University of Buenos Aires, and Chulalongkorn University in Bangkok. Multidisciplinary research conducted by these universities’ programs in design and development indicates great depth in the new forms of inclusive economic activity.

In New York, an enormous number of start-up enterprises beginning in Silicon Alley are now flooding neighborhoods from Brooklyn to Manhattan. In the last decade, New York replaced Boston as the second most innovative site of America’s economy. The maker culture phenomenon, for example, has exploded innovation and the reimagining of products in response to emerging technologies.

In Buenos Aires, the social enterprise and design explosion dates back to the 2001-2002 economic crisis, when more than 2 million people were involved in the “barter economy” following devaluation and loss of employment. Small design and technology firms, mostly led by people under 30, generate new goods and services, jobs and incomes.

In Bangkok, creative enterprises flourished in the wake of the 1997 East Asian financial crisis and in resistance to growing economic pressure from China. Young Thai entrepreneurs have begun to bring together technology, design, and knowledge of local and international markets to produce new goods and services.

+ Download the complete schedule of The New School activities at the WUF7 (.pdf)

+ See the results of this event